It was a notice that Pine View Farms co-owner Melanie Boldt wishes she didn’t have to share.

On Tuesday, the popular local farm and meat supplier announced that last week, avian influenza was discovered on one of their partner producers’ farms, and all of the poultry there had to be euthanized to prevent the disease from spreading. That farm provides birds which are are slaughtered and processed by Pine View. 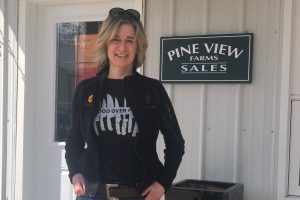 Boldt said it felt like a “gut punch,” and she was heartbroken to have to share the news.

“At Thanksgiving we do about 1,000 birds, and at Christmas we do more than that,” she explained.

“It’s a devastating loss for all of us, particularly for our partner producer. But it really extends all through our supply chain, because it affects us, and the people who buy turkeys from us, and ultimately the end consumer.”

It also means that Pine View Farms, which is located near Saskatoon, won’t be able to fill all of the Thanksgiving orders.

“We have scoured the province and scrambled, looking for local turkeys that we can process fresh for the long weekend, and we’re just not sure that we can fulfil that,” said Boldt. “We had to let our stores know that we probably wouldn’t be able to fill their orders.”

Boldt said her business is now looking towards Christmas to see if it can get enough turkeys for the holiday.

There’s a renewed concern for its own farm chicken flocks as well, due to the fall bird migration. The rules are so strict, Boldt said, that only two people are even allowed into the chicken barn.

“We don’t want them outside,” she said.

“We’re being very, very careful with access to the barn and disinfecting our boots and shoes, and changing in and out of the barn, doing everything we can to mitigate the risk, as are all farmers.”

At this point, Boldt said she doesn’t know how badly the issue is going to affect the farm financially, though she noted that Thanksgiving and Christmas are Pine View’s most profitable seasons.

Boldt noted there are lots of alternatives to turkey at this time of year, like ham, roast chickens or porchetta roasts – consumers just have to be open to alternatives.

“I’m hoping that the local community will come out and support local farmers, and eat what’s in season and what’s available,” she said.

Cinthya Wiersma with the Turkey Farmers of Saskatchewan confirmed in a statement that thousands of turkeys have been euthanized in recent weeks because of avian influenza at two commercial turkey operations.

In the past three weeks, she said avian influenza has affected all western provinces, resulting in the loss of millions of kilograms of birds.

“However, nine of the 11 commercial turkey farms in Saskatchewan are still in production and following strict biosecurity protocols,” Wiersma noted.

Turkeys will be available at Saskatchewan retailers for both Thanksgiving and Christmas, she said, but the supply will be “substantially limited” when compared with previous years.

“(It’s) hard to say how much Saskatchewan will be affected by these losses,” Wiersma said, “as the majority of these birds were being processed in Alberta. The supply will partially depend on the current stocks available by the wholesalers.”

The order limits the transport and co-mingling of poultry after “several cases” of avian influenza were confirmed in Saskatchewan.

The order remains in effect until at least Oct. 21, and prohibits the movement to and participation of birds in shows, auctions, agricultural fairs and any other events where birds would normally be brought together from multiple locations.

New York: In her address at the 77th session...

New York: In her address at the 77th session...